How Can We Reconcile Prison Abolition With #MeToo? 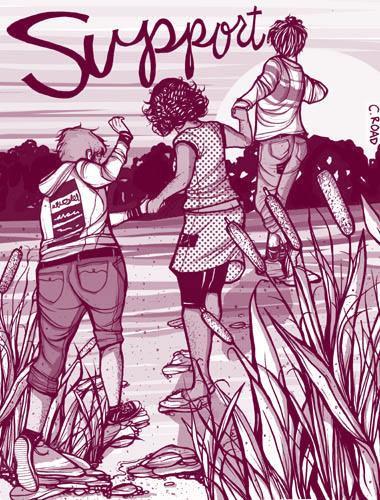 The past 17 years have seen an increase in prison abolition groups and organizing. In stark contrast to prison reform advocates, who push to improve prison conditions but posit that prisons are ultimately necessary for societal safety, prison abolitionists charge that prisons themselves are sites of violence and can never be adequately reformed. Instead, prisons must be eliminated; so too must the conditions that send people to prison, including racism, poverty and root causes of violence.

Conspicuous by its absence in many of the conversations about prison abolition, however, is how to address gender-based violence and harm without relying on police and prisons.

At the same time, many of the most prominent organizations and movements fighting domestic and sexual violence continue to rely on policing and prisons. In the aftermath of the six-month prison sentence imposed upon Brock Turner, the white Stanford student convicted of sexually assaulting an unconscious woman, feminist groups and activists expressed outrage at the shortness of the sentence and called for the ouster of his sentencing judge.

Similarly, as accusations against celebrities like Harvey Weinstein and Bill Cosby mounted, calls for justice centered arrest and prison. The most vocal calls for “justice” failed to recognize that harsher punishments and lengthier sentences have always fallen hardest upon—and devastated—people and communities of color, while providing little safety or prevention from gender violence.

This reliance on criminalization reinforces state violence, which is not only perpetrated against overwhelmingly black and brown and poor men, but also upholds a system punishing women (cisgender and trans), trans men, gender non-conforming and intersex people, even when they themselves are victimized by violence. We’ve seen this in the case of Marissa Alexander, the Florida mother initially sentenced to 20 years in prison after firing a warning shot to stop her abusive husband’s assault. We’ve seen this in the case of Ky Peterson, a black trans man currently serving a 20-year prison sentence after fatally shooting the man who raped him.

How did we get to this divide?

In 1994, Congress passed the Violence Against Women Act (VAWA), which pushed police to respond to complaints of domestic violence, sexual assault and other gender-based violence. The act was the result of years of lawsuits and organizing by many feminists to force law enforcement to respond to gender-based violence rather than dismissing it as an interpersonal issue. In many jurisdictions, VAWA resulted in mandatory arrest laws and more punitive prison sentences. It also led to policies such as dual arrests, in which police arrested both people. Some jurisdictions jail victims as material witnesses or impose fines and threaten a survivor with arrest if they do not cooperate with prosecution. (The city of Columbus, Georgia, changed its policy of non-cooperation fines and arrests after a lawsuit by abuse survivor Cleopatra Harrison and the Southern Center for Human Rights.)

By and large, carceral feminism views solutions to gender-based violence through a white middle-class lens.

Carceral feminism is the term often used to describe this reliance on increased policing, prosecution and imprisonment as the primary solution to gender-based violence. By and large, carceral feminism views solutions to gender-based violence through a white middle-class lens, one which ignores the ways in which intersecting identities, such as race, class, gender identity and immigration status, leave certain women more vulnerable to violence, including state violence.

At the same time, women’s incarceration has skyrocketed. In 1980, the nation’s jails and prisons held 25,450 women; 10 years later, that number had nearly tripled to 77,762. By 2000, that number had doubled again to 156,044 and continues to grow. As of 2017, jails and prisons incarcerate 209,000 women. (These numbers do not include women in immigrant detention or youth jails or trans women in men’s jails or prisons.) At least half of incarcerated women reported surviving violence even before being arrest.

It’s still also true that nearly 90 percent of incarcerated people are men (or classified as men). But not every feminist and anti-violence activist espouses a carceral solution. For years, anti-violence activists and organizations, such as Beth Richie and  INCITE! , have argued that increased criminalization replaces abuse by an individual with abuse by law enforcement, courts and prisons while doing nothing to address the root causes of violence against women. We’ve seen this with Marissa Alexander, Ky Peterson and countless other women and trans people.