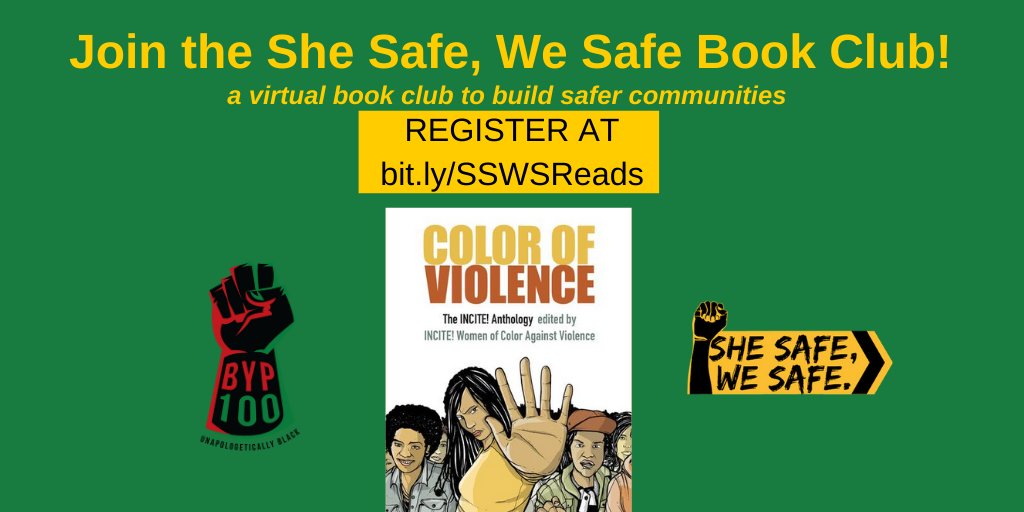 The BYP100 Our She Safe, We Safe campaign is launching a virtual bookclub! We’re starting with the Color Of Violence Anthology by INCITE! to celebrate 20 years of INCITE!’s work. Sign up here to get the readings and discussion guide: https://buff.ly/3ad9Y9x

About the She Safe, We Safe Campaign

She Safe, We Safe is a transformative movement campaign led by BYP100 to put an end to the different forms of gender violence that Black women, girls, femmes and gender non-conforming people face everyday. We are embracing a dual strategy approach, which means that we will work to both shift culture & establish new ways of keeping each other safe within our communities AND work to fight against the violence of the state, police, and within Black communities.

The Goals of the Campaign are to:

We invite you to grapple with these questions with us as we collectively learn about the ways in which the current policing and prison system fails to address gender based violence, and dream up Black futures where Black women, girls and gender non-conforming folks are safe.

Each month we’ll pick a book or anthology written by folks on the frontlines of this work. We’ll provide discussion questions and virtual spaces to dig into the texts and hear how the works are landing with folks in communities across the country. Sign up here!