Beyond the Non-Profit Industrial Complex

“I’m very much afraid of this ‘Foundation Complex.’ We’re getting praise from places that worry me.”

“I want us all to be real creative about our tactics and strategies to dismantle the empire.”

– Joo-Hyun Kang, The Revolution Will Not Be Funded Conference, 2004

In 2004, along with women of color at UC Santa Barbara, INCITE! organized the conference: “The Revolution Will Not Be Funded: Beyond The Non-Profit Industrial Complex.” This conference drew in hundreds of organizers and activists searching for a space to address the ways in which the non-profit/NGO structure often obstructs radical movement building. At this conference, speakers and attendees addressed the following questions:

What is the “non-profit industrial complex”?

The non-profit industrial complex (or the NPIC) is a system of relationships between:

The state uses non-profits to:

How did INCITE! come to explore this issue?

In 2004, INCITE! learned the hard way that the revolution will not be funded. When we began in 2000, we took a stand against state funding since we perceived that antiviolence organizations who had state funding had been co-opted. It hadn’t occurred to us to look at foundation funding in the same way.

However, in a trip to India (funded, ironically, by the Ford Foundation), we met with many non-funded organizations that criticized us for receiving foundation grants. When we saw that groups with much less access to resources were able to do amazing work without foundation funding, we began to question our reliance on foundation grants.

Our suspicions were confirmed when, in February 2004, INCITE! received an e-mail from the Ford Foundation with the subject line “Congratulations!” and an offer of “a one-year or two-year grant of $100,000” to cover our general operating expenses in response to a grant proposal the Ford Foundation had solicited from us. We committed to two major projects (SisterFire multimedia tour and Color of Violence III conference in New Orleans) based on this funding. Then, unexpectedly on July 30, 2004, the Ford Foundation sent another letter, explaining that it had reversed its decision because of our organization’s statement of support for the Palestinian liberation struggle.

INCITE! learned firsthand the dangers of relying on foundations for our movement building. But we also learned that social justice organizations do not always need the foundation support they think they do. Strapped with this sudden loss of funding but committed to organizing two major projects, INCITE! members started raising money through grassroots fundraising — house parties, individual calls, T-shirt sales, and so on — and we were able to quickly raise the money we lost when the Ford Foundation rescinded their grant offer.

This story is not an isolated incident. The NPIC has a long and complicated legacy. The Revolution Will Not Be Funded anthology and conference recordings review this history and political context, but offer no simple answers. The contributors are a multigenerational assembly of organizers working inside and outside the NPIC from a variety of — even conflicting — perspectives. However, we hope the book and conference continue a conversation about how to think beyond state-proctored models like the non-profit system for organizing political projects for social change.

Audio from 2004 Incite! Conference, The Revolution Will Not Be Funded 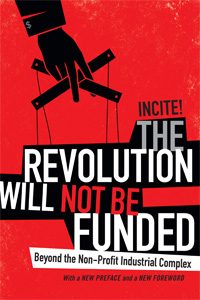