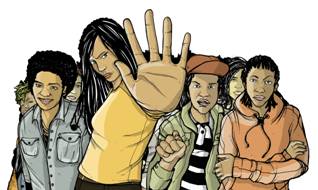 Join founders and generations of leaders of INCITE! for a discussion of the origins, genealogies, and futures of abolition feminism.

INCITE!, a national radical feminist of color organization, was founded in 2000 and has since envisioned, articulated, and promoted what has come to be known as abolition feminism, a liberatory vision of a world free from all forms of violence, including those produced by carceral logics and systems of surveillance, policing, punishment, and exile. Abolition feminism envisions “a society based on radical freedom, mutual accountability, and passionate reciprocity. In this society, safety and security will not be premised on violence or the threat of violence. It will be based on a collective commitment to guaranteeing the survival and care of all people” (from the 2002 INCITE!-Critical Resistance Statement on Gender Violence and the Prison Industrial Complex).

Abolition feminism, and its roots in grassroots anti-violence organizing by women, trans and gender nonconforming people of color, is particularly relevant in this moment of heightened attention on movements advocating abolition and resisting incarceration of our communities – and of backlash rooted in carceral feminism.

The conversation will be followed by a reception honoring INCITE!’s 20 year anniversary.

Speakers will be announced.