Statement on Gender Violence and the Prison Industrial Complex (2001)

We call social justice movements to develop strategies and analysis that address both state AND interpersonal violence, particularly violence against women. Currently, activists/movements that address state violence (such as anti-prison, anti-police brutality groups) often work in isolation from activists/movements that address domestic and sexual violence. The result is that women of color, who suffer disproportionately from both state and interpersonal violence, have become marginalized within these movements. It is critical that we develop responses to gender violence that do not depend on a sexist, racist, classist, and homophobic criminal justice system. It is also important that we develop strategies that challenge the criminal justice system and that also provide safety for survivors of sexual and domestic violence. To live violence free-lives, we must develop holistic strategies for addressing violence that speak to the intersection of all forms of oppression. The anti-violence movement has been critically important in breaking the silence around violence against women and providing much-needed services to survivors. However, the mainstream anti-violence movement has increasingly relied on the criminal justice system as the front-line approach toward ending violence against women of color. It is important to assess the impact of this strategy.

1. Law enforcement approaches to violence against women MAY deter some acts of violence in the short term. However, as an overall strategy for ending violence, criminalization has not worked. In fact, the overall impact of mandatory arrests laws for domestic violence have led to decreases in the number of battered women who kill their partners in self-defense, but they have not led to a decrease in the number of batterers who kill their partners. Thus, the law protects batterers more than it protects survivors.

2. The criminalization approach has also brought many women into conflict with the law, particularly women of color, poor women, lesbians, sex workers, immigrant women, women with disabilities, and other marginalized women. For instance, under mandatory arrest laws, there have been numerous incidents where police officers called to domestic incidents have arrested the woman who is being battered. Many undocumented women have reported cases of sexual and domestic violence, only to find themselves deported. A tough law and order agenda also leads to long punitive sentences for women convicted of killing their batterers. Finally, when public funding is channeled into policing and prisons, budget cuts for social programs, including women’s shelters, welfare and public housing are the inevitable side effect. These cutbacks leave women less able to escape violent relationships.

3. Prisons don’t work. Despite an exponential increase in the number of men in prisons, women are not any safer, and the rates of sexual assault and domestic violence have not decreased. In calling for greater police responses to and harsher sentences for perpetrators of gender violence, the anti-violence movement has fueled the proliferation of prisons which now lock up more people per capita in the U.S. than any other country. During the past fifteen years, the numbers of women, especially women of color in prison has skyrocketed. Prisons also inflict violence on the growing numbers of women behind bars. Slashing, suicide, the proliferation of HIV, strip searches, medical neglect and rape of prisoners has largely been ignored by anti-violence activists. The criminal justice system, an institution of violence, domination, and control, has increased the level of violence in society.

5. The reliance on the criminal justice system has taken power away from women’s ability to organize collectively to stop violence and has invested this power within the state. The result is that women who seek redress in the criminal justice system feel disempowered and alienated. It has also promoted an individualistic approach toward ending violence such that the only way people think they can intervene in stopping violence is to call the police. This reliance has shifted our focus from developing ways communities can collectively respond to violence.

In recent years, the mainstream anti-prison movement has called important attention to the negative impact of criminalization and the build-up of the prison industrial complex. Because activists who seek to reverse the tide of mass incarceration and criminalization of poor communities and communities of color have not always centered gender and sexuality in their analysis or organizing, we have not always responded adequately to the needs of survivors of domestic and sexual violence.

1. Prison and police accountability activists have generally organized around and conceptualized men of color as the primary victims of state violence. Women prisoners and victims of police brutality have been made invisible by a focus on the war on our brothers and sons. It has failed to consider how women are affected as severely by state violence as men. The plight of women who are raped by INS officers or prison guards, for instance, has not received sufficient attention. In addition, women carry the burden of caring for extended family when family and community members are criminalized and wherehoused. Several organizations have been established to advocate for women prisoners; however, these groups have been frequently marginalized within the mainstream anti-prison movement.

2. The anti-prison movement has not addressed strategies for addressing the rampant forms of violence women face in their everyday lives, including street harassment, sexual harassment at work, rape, and intimate partner abuse. Until these strategies are developed, many women will feel shortchanged by the movement. In addition, by not seeking alliances with the anti-violence movement, the anti-prison movement has sent the message that it is possible to liberate communities without seeking the well-being and safety of women.

3. The anti-prison movement has failed to sufficiently organize around the forms of state violence faced by LGBTI communities. LGBTI street youth and trans people in general are particularly vulnerable to police brutality and criminalization. LGBTI prisoners are denied basic human rights such as family visits from same sex partners, and same sex consensual relationships in prison are policed and punished.

4. While prison abolitionists have correctly pointed out that rapists and serial murderers comprise a small number of the prison population, we have not answered the question of how these cases should be addressed. The inability to answer the question is interpreted by many anti-violence activists as a lack of concern for the safety of women.

5. The various alternatives to incarceration that have been developed by anti-prison activists have generally failed to provide sufficient mechanism for safety and accountability for survivors of sexual and domestic violence. These alternatives often rely on a romanticized notion of communities, which have yet to demonstrate their commitment and ability to keep women and children safe or seriously address the sexism and homophobia that is deeply embedded within them.

We call on social justice movements concerned with ending violence in all its forms to:

1. Develop community-based responses to violence that do not rely on the criminal justice system AND which have mechanisms that ensure safety and accountability for survivors of sexual and domestic violence.Transformative practices emerging from local communities should be documented and disseminated to promote collective responses to violence.

3. Make connections between interpersonal violence, the violence inflicted by domestic state institutions (such as prisons, detention centers, mental hospitals, and child protective services), and international violence (such as war, military base prostitution, and nuclear testing).

4. Develop an analysis and strategies to end violence that do not isolate individual acts of violence (either committed by the state or individuals) from their larger contexts. These strategies must address how entire communities of all genders are affected in multiple ways by both state violence and interpersonal gender violence. Battered women prisoners represent an intersection of state and interpersonal violence and as such provide and opportunity for both movements to build coalitions and joint struggles.

5. Put poor/working class women of color in the center of their analysis, organizing practices, and leadership development. Recognize the role of economic oppression, welfare “reform,” and attacks on women workers’ rights in increasing women’s vulnerability to all forms of violence and locate anti-violence and anti-prison activism alongside efforts to transform the capitalist economic system.

6. Center stories of state violence committed against women of color in our organizing efforts.

7. Oppose legislative change that promotes prison expansion,criminalization of poor communities and communities of color and thus state violence against women of color, even if these changes also incorporate measure to support victims of interpersonal gender violence.

8. Promote holistic political education at the everyday level within our communities, specifically how sexual violence helps reproduce the colonial, racist, capitalist, heterosexist, and patriarchal society we live in as well as how state violence produces interpersonal violence within communities.

9. Develop strategies for mobilizing against sexism and homophobia WITHIN our communities in order to keep women safe.

10. Challenge men of color and all men in social justice movements to take particular responsibility to address and organize around gender violence in their communities as a primary strategy for addressing violence and colonialism. We challenge men to address how their own histories of victimization have hindered their ability to establish gender justice in their communities.

We seek to build movements that not only end violence, but that create a society based on radical freedom, mutual accountability, and passionate reciprocity. In this society, safety and security will not be premised on violence or the threat of violence; it will be based on a collective commitment to guaranteeing the survival and care of all peoples.

Know Your Rights In Case of Immigration/Police Raid

Women of Color and Welfare 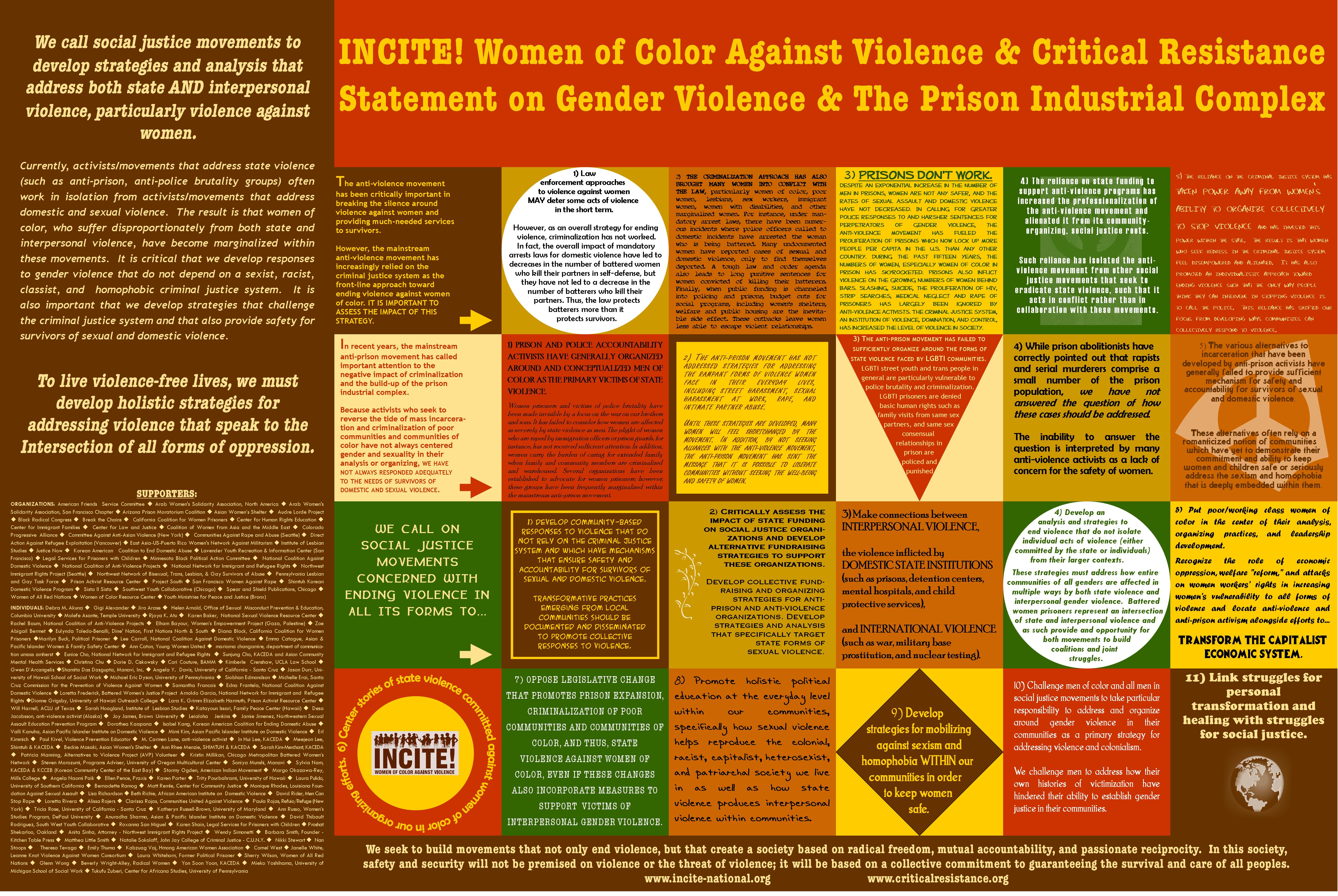