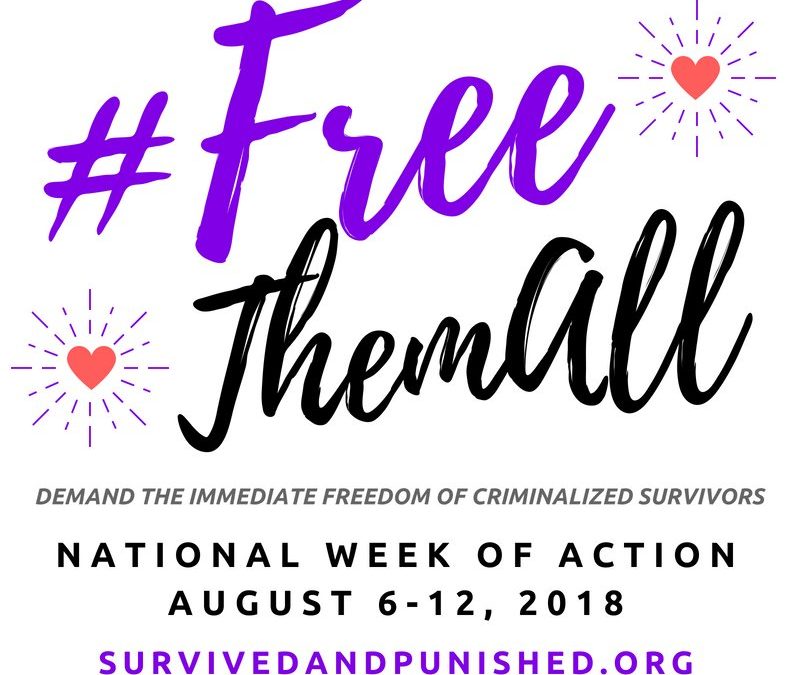 Please join us on August 6-12 for #FreeThemAll National Week of Action to demand the immediate release of ALL criminalized survivors.

Each day we’ll share information, updates, experiences of survivors, and ways for people to take action, including:

Join us in Sacramento, San Francisco, Chicago, New York, and elsewhere as we fight for the freedom of criminalized survivors!

To kick off the #FreeThemAll National Week of Action, Survived and Punished will lead a twitter power. Together, we’ll highlight how survivors of domestic violence and sexual assualt are criminalized by police, courts, jails, prisons, and deportations. Learn how you can disrupt the abuse to prison (to deportation) pipeline and show up for criminalized survivors. Join us to demand the immediate freedom of all criminalized survivors – follow @survivepunish for updates!

The majority of people serving Life Without Parole (LWOP) in the women’s prisons are survivors of domestic and sexual violence. Join the California Coalition for Women Prisoners (CCWP) and CURB as we visit the capitol to rally to #DropLWOP and present Governor Brown with our request that he commute every Life Without Parole Sentence in the state of California. We will also visit state elected officials to urge their support for various sentencing reform bills.

Join Survived & Punished for a teach-in about surviving violence, ICE and the experiences of criminalized immigrant survivors! We will be sharing what we know about demystifying ICE, systems of criminalization/policing and deportation; how gender and gender violence impact people’s experiences of being targeted by ICE; what’s changed & what hasn’t for undocumented/immigrant survivors under this administration; and how we can support more immigrant survivors in our communities. We will also have Ny Nourn and Floricel Liborio Ramos, two survivors of domestic violence and immigration detention, share their thoughts, experiences and analyses with us. RSVP here!

As the #MeToo Movement brought gender violence to the forefront of the national conversation, New York State has continued to criminalize and incarcerate survivors of gender violence at an alarming rate. The Survived and Punished #FreeThemNY Campaign is demanding that Governor Cuomo commute the sentences of survivors of gender violence who are in prison throughout New York State. A huge portion of survivors, overwhelmingly Black women, are unsupported and unaccounted for by the mainstream anti-violence and anti-domestic violence movement, leading to a gap in the national conversation around the #MeToo Movement. This event is part of the National #FreeThemAll Week of Action. Our local event will increase awareness for incarcerated survivors by sharing their stories and elevate our demand that Governor Cuomo commute their sentences.

Want to host your own event and participate? Join us! Fill out this form to share your knowledge and advocate for freedom of all criminalized survivors!