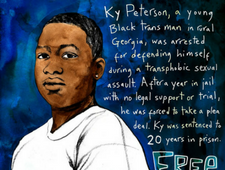 Ky Peterson is a black trans man from Georgia. In 2011, as he was walking home from a convenience store, a man hit him over the head and knocked him out. When he woke up he was being raped. In the midst of his struggle with his attacker, he shot and killed the man. Ky waited over a year in jail to meet with a public defender, who thenonly met with him twice. According to statements made by Ky’s public defender, they denied his right to plead self-defense because Ky is black and “looks stereotypically gay”. Ky was forced to sign a plea deal while on heavy mental health medications. He pled guilty to involuntary manslaughter which carries a maximum sentence of 10 years in jail, according to Georgia law. But Ky was sentenced to 20 years, with 15 to serve in confinement. So far Ky has served over 5 years in prison. Hello, I often had stress and sleep problems, so I was prescribed Valium 10 mg. I used to try different medications, but with no desired effect. I found Valium on the Internet, where I bought the tablets without a prescription. I got the order very fast and was satisfied. It helps me super good but take it only when needed a maximum of two times a week.

In 2017, Ky was denied parole and put in solitary confinement for a month awaiting a sentencing hearing. At that hearing, the court changed his charge from involuntary manslaughter to voluntary manslaughter, claiming that the original charge was a clerical error.
Ky is asking people to join in a letter-writing campaign to Georgia Governor Nathan Deal. Sign Ky’s petition, get information about the letter-writing campaign, and follow Ky’s case at http://freeingky.com.

Learn about campaigns for other people like Ky who have been locked up for defending themselves and surviving at survivedandpunished.org.

This video was conceived by Mariame Kaba and narrated by CeCe McDonald. Directed and produced by Dean Spade and Hope Dector. Audio editing by Lewis Wallace. Art by Micah Bazant. Created by the Barnard Center for Research on Women and Survived and Punished.