May 21: A CALL TO ACTION TO END STATE VIOLENCE AGAINST BLACK WOMEN AND GIRLS (UPDATED!) 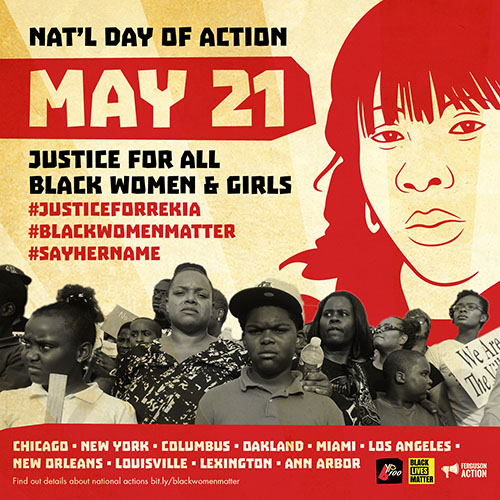 Black Youth Project 100, Ferguson Action, and #BlackLivesMatter have called a

National Day of Action to End State Violence Against Black Women and Girls:

Black women – queer and not queer, transgender and not transgender – are killed, beaten, profiled, and harassed by police across the country in many of the same ways as Black men, whether it’s “broken windows policing,” “driving while Black,” or the “war on drugs.” For example:

It’s time to break the silence around Black women and police violence – because #BlackWomensLivesMatter!

Join the National Day of Action!

Here are 5 things you can do in your area:

Some things you can push for your local police department to do to prevent police abuse of Black women: