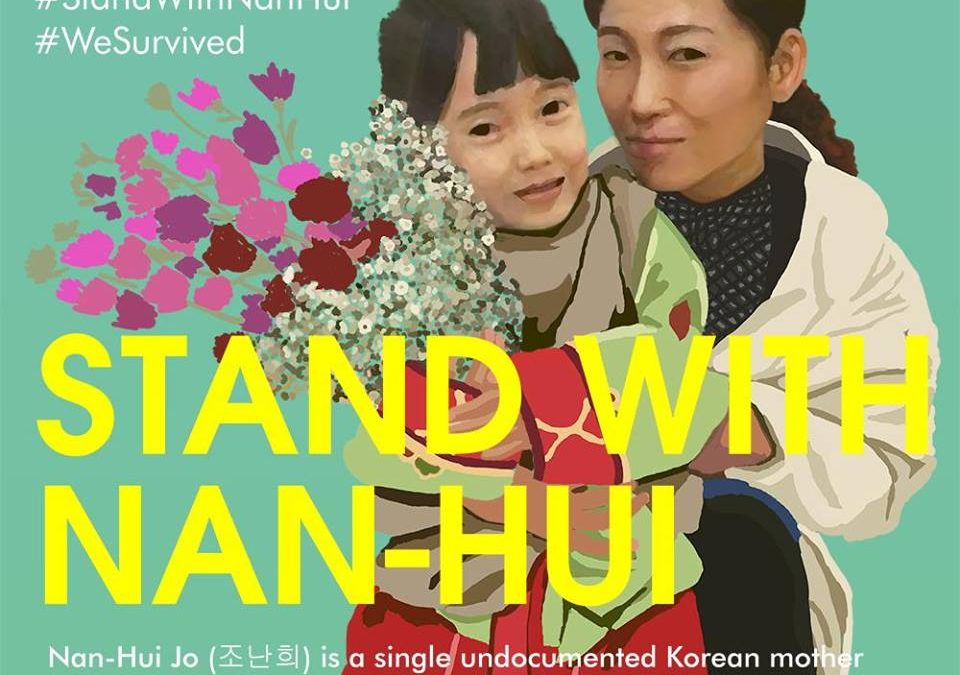 #StandWithNanHui and Stop the Deportation! Reunite a Domestic Violence Survivor with Her Daughter!

The verdict is in.

After an aggressive retrial in Yolo County, CA, Nan-Hui Jo, devoted mother and survivor of domestic violence, has been convicted on charges of “child abduction.” Supporters of Nan-Hui are outraged and deeply saddened over this verdict. In light of this conviction, deportation proceedings may be imminent, which would result in permanent separation between Nan-Hui and her daughter.

Nan-Hui Jo (A 098 906 641) is currently at high risk for deportation. In 2009, Nan-Hui fled the United States with her infant daughter, Vitz Da, to escape the physical and emotional abuse of the child’s father,  Upon her escape, her ex-partner filed child abduction charges, for which Nan-Hui was tried twice. Customs and Border Protection (CBP) and Immigration and Customs Enforcement (ICE) have continued to leverage their institutional power to maintain an immigration hold and pursue deportation, which would permanently separate Nan-Hui from her daughter.

When In July 2014, Nan-Hui re-entered the United States for a 3 month visit to Hawai’i with her daughter. At the airport, she was immediately arrested and forcibly separated from her child. Nan-Hui was tried five months later on alleged child abduction charges, resulting in in a hung jury..  Ignoring all evidence of domestic violence–including two calls to the police in Sacramento after her child’s father physically abused her and testimony from her former partner admitting to physical assault and threats–the Yolo County District Attorney aggressively pursued a retrial. Assistant District Attorney Steve Mount tried to paint Nan-Hui as an abuser in his cross examination, accusing her of leaving the country with her child in a malicious attempt to retaliate against her ex-partner. To smear her credibility, Mount refused to acknowledge Nan-Hui as a survivor of domestic violence, accusing her of being a “tiger mom” who was “clearly a very capable woman” and who knowingly exploited welfare and immigration systems. We see the District Attorney’s remarks for what they are: racist, anti-immigrant, and sexist tropes that have no place in a “justice system.”

The Yolo County DA, CBP, and ICE have done irreparable damage to Nan-Hui and Vitz Da. Mother and daughter have not been allowed to talk in over seven months. Nan-Hui has been imprisoned without bail and without due process since July 2014 because of the immigration hold, despite her status as a survivor and a pending U Visa application on file. Vitz Da is currently in the full custody of her former partner.

We stand with Nan-Hui against an unjust system that criminalizes survivors and immigrants, as well as separates families. We call on CBP and ICE to immediately release Nan-Hui and stop all deportation proceedings.

2. Make a QUICK phone call in support of Nan-Hui:

Sample Script: “I am calling to ask Director Scheller/Humphrey to drop the immigration hold against Ms. Nan-Hui Jo (A 098 906 641) and allow her to reunite with her six-year-old daughter. Ms. Jo is a survivor of domestic violence and her case should be considered under the parental interests directive. I ask that ICE/CBP exercise its prosecutorial discretion and drop Ms. Jo’s deportation case.”

(for a more complete list of organizations that have signed on to support Nan-Hui, please click here: http://www.kaceda.org/standwithnanhui/)