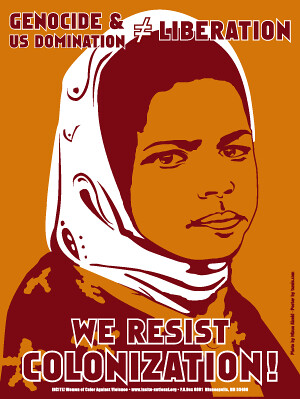 The following is a statement from Palestinian Queers for BDS:

Call upon all Queer groups, organizations and individuals around the world to

Boycott the Apartheid State of Israel.

As Palestinian Queers, we see the Queer movements as political in their nature; and ones that analyze the intersections between different struggles, evaluate relations of power and try to challenge them. We firmly believe that fighting for the rights of oppressed and marginalized queer minorities cannot be separated from fighting against all forms of oppression around the world. This is evident in the proud history of the queer movement worldwide, which has joined numerous global socio-political struggles against manifestations of oppression, imperialism, injustice, and discrimination wherever they exist. In continuation to this proud history, we Palestinian Queer activists, call upon the LGBTQI communities around the globe to stand for justice in Palestine through adopting and implementing broad boycott, divestment and sanctions (BDS) against Israel until the latter has ended its multi-tiered oppression of the Palestinian people, in line with the 2005 Palestinian civil society call for BDS [1].

For 62 years, Israel’s oppressive regime of colonization, occupation and apartheid has systematically and consistently denied the Palestinian people of their basic human rights. Palestinians living in the West Bank have been subjected to a brutal military occupation manifested by Israel’s illegal colonies, checkpoints, and the apartheid wall. Palestinians living inside Israel continue to face systematic, legalized apartheid policies which discriminate against them in all walks of life, rendering them second class citizens, at best, inside Israel. The majority of Palestinians in the Diaspora continue to be denied their UN-sanctioned right of return to their homes. The 1.8 million Palestinians in Gaza face the most brutal oppression of all as they live in an open air prison after years of the illegal Israeli siege on the Gaza strip, one that was described as ‘slow genocide’ by prominent international law experts.

This Israeli ongoing oppression of the Palestinian people does not differentiate between Palestinian Queers, and non-Queers. Not only do Palestinian queers face these injustices on a daily basis and undergo the Israeli oppression like any other Palestinian, but also our name and struggle is often wrongly used and abused to “Pinkwash” Israel’s continuous crimes against the whole Palestinian population. In the last years Israel has been leading an international campaign that tries to present Israel as the “only democracy” and the “gay haven” in the Middle East, while ironically portraying Palestinians, who suffer every single day from Israel’s state racism and terrorism, as barbaric and homophobic.

Thus, we Palestinian queer activists call on Queer groups, organizations and individuals around the world to stand for justice and in the face of Israel’s pinkwashing efforts through joining the global campaign for Boycott, Divestment and Sanctions (BDS) against Israel until it fully complies with international law, and ends its occupation, colonization and apartheid. We call on you to: