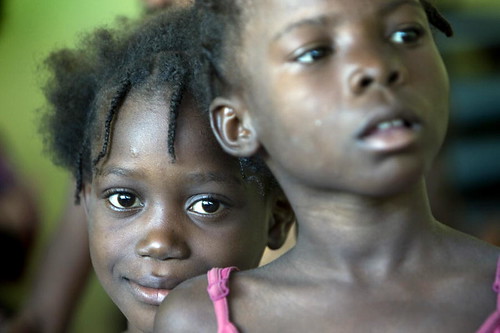 Earlier this year, 10 US Baptist missionaries faced kidnapping charges in Haiti, after taking 33 children across the Haitian border into the Dominican Republic.  Their explanation that they were trying to rescue Haitian children orphaned as a result of the January 13th earthquake was called into question when it was found that some of the children had existing parents.

The New York Times recently reported that the children have since been reunited with their families:

The 33 Haitian children taken from their earthquake-damaged homes by American church members in January were reunited with their biological families on Wednesday, officials said. The children, who ranged in age from 4 months to 12 years, were cared for at the SOS Children’s Village in the capital, Port-au-Prince, while social workers investigated their backgrounds. Nine of the 10 Americans arrested by the Haitian authorities while trying to take the children to the Dominican Republic were later released. The leader, Laura Silsby, remains in custody.

On January 25th, the Adoptees of Color Roundtable released a statement on transnational adoption of Haitian children.  They write:

We uphold that Haitian children have a right to a family and a history that is their own and that Haitians themselves have a right to determine what happens to their own children. We resist the racist, colonialist mentality that positions the Western nuclear family as superior to other conceptions of family, and we seek to challenge those who abuse the phrase “Every child deserves a family”  to rethink how this phrase is used to justify the removal of children from Haiti for the fulfillment of their own needs and desires. Western and Northern desire for ownership of Haitian children directly contributes to the destruction of existing family and community structures in Haiti. This individualistic desire is supported by the historical and global anti-African sentiment which negates the validity of black mothers and fathers and condones the separation of black children from their families, cultures, and countries of origin.

Full statement is here.  Also, the blog Outlandish Remarks: a queer korean adoptee talks back, responds to the question of how non-Haitian people can support families and children in Haiti in lieu of adoption:

My common sense response would be for those adopters to take the money they would be using to buy a Haitian child and give it to organizations working within the child’s community to provide relief and to eventually rebuild the infrastructure of that community so the child can remain in its care.